Enrich your knowledge in just 3 minutes. Blogletter for the curious, by a curious.
Join 78 like-minded people and get the fortnightly newsletter

How’s it going? Corona only sounds like a buzzword now. Anyway, here’s to another week of Knowledge Day and if you are reading this, then it means my Blog is finally live on the new domain! WooHoo!

head off to KnowledgeDay.in to check it out!

After all the lessons on rocket building, the tech behind self-driving cars, and what not; I have come back with another issue taking stories of people who have exploited the system. So let’s just get to it real quick.

Scandals worth knowing about

Remember Volkswagen from issue #26, and it’s kids (Audi, Porsche, VW itself)? Well, let’s slide a little back - 2015 and there was an interesting discovery on their diesel vehicles.

Dubbed the “Diesel dupe” or “Emissiongate”, in September 2015, the EPA found that many VW vehicles were fitted with a “defeat device” - that could detect when the vehicle is being tested and changed performance accordingly to improve results.

VW admitted that about 11 million cars worldwide, including eight million in Europe, were fitted with so-called “defeat device”. Smart play, on a global scale.

The highest number of cars fitted with this smart device was in the European region, where the actual emissions were in legal range - not much of a fine there but they did have to call back all millions of cars and fix them. They were also fined for $2.8 Billion in the US and $70 Million in India among many other countries.

As of June 2020, they’d poured Billions in fines, penalties, financial settlements into this, but possibly still less in front of the profits they’d made false selling millions of cars for nobody knows how long.
More here -> BBC News, Dec 2015

Story of 2017, Apple was caught deliberately slowing down older versions of iPhones with every update. So that everyone buys the latest - Unrealizing their old iPhone was still capable enough to work just fine with the latest update.

They are fined for mere €25 Million by France’s competition and fraud watchdog DGCCRF, for the fact that consumers were not warned.

But why wouldn’t they penalize Apple for the malpractice?

I’m glad you asked. That is because Apple had an explanation for the scandal above. Read: “The lithium-ion batteries in the devices became less capable of supplying peak current demands, as they aged over time.

That could result in an iPhone unexpectedly shutting down to protect its electronic components.

So, they released the software updates for the iPhone 6, iPhone 6s, and iPhone SE which “smoothed out” battery performance.”

So…That means they really didn’t want people to buy a new iPhone often.
(P.S. that reason has been accepted and they still continue to slow down old iPhones with updates. Now with pride.)
More here -> BBC News

Alright, you either know about this or at least have heard of this one. The story IMO is big for a tiny section of this newsletter. Yet, I’ll try to squeeze it short.

So, in 2014, a data scientist-cum-professor Aleksandr Kogan created a Facebook quiz app and invited users to find out their personality type (Most likely you’ve played those quizzes, I know I have), so the intent wasn’t just a fun game but actually data collection of not only who played the game but also the public data of their friends.

Some 305,000 people played the game but it gathered information of about 87 million people. (According to FB)

The data was then sold to Cambridge Analytica, a data firm, which used it to psychologically profile the voters in the US.

In March 2018, The New York Times, working with The Observer of London and The Guardian, obtained a cache of documents from inside Cambridge Analytica, which seemed to have been building voter profiles for US elections. CA obviously denied it broke any laws and said it did not use the data in the US Presidental election.

Fair enough? But at the same times, someone surfaced a video from the (then) CEO of Cambridge Analytica, Alexander Nix, suggesting ways to discredit political rivals by some sort of “tactics that are very effective” ;) 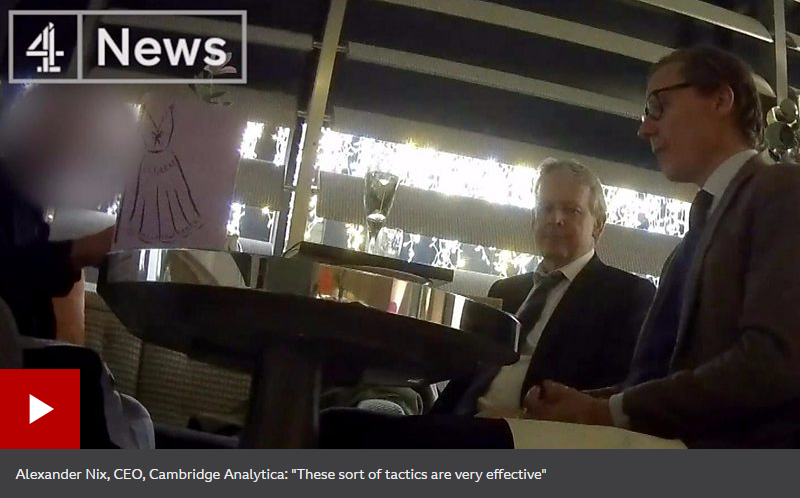 Now the real show in the story was CA and their analytics, but Facebook had been expecting this. They said they had put a good sum aside for the scandal being possibly caught so that the firm won’t feel as much financial strain from this penalty.

Ending: Facebook apologized to users and notified the one whose information was breached. Fined $5bn; CA, on the other hand, denied any wrongdoing and claimed every data souced to be fake.
More here -> NyTimes, BBC News(1), BBC News(2)