Howdy? I hear California is on fire! More than 3% of the state’s roughly 100 million acres of land, making 2020 also the largest wildfire season. (Remember, the Australian fires happened this year itself). Nature is doing it’s best to clean up this set of species of the earth, to pave way for the next life.

Which calls in the need to escape the place, while we can. Today’s article aims to address that.

Today’s topic is exciting! Because it works one of the bleeding edges or say the peak of what engineering has achieved so far. And still has a lot to be progressed with. Doesn’t matter if you think it’s very nerdy, because once you catch the basic of explorations and science behind the outer space. There’s no doubt you’re gonna be reading and exploring more.

I personally started reading bits about space and rocket science out of interest last year only. Probably around the same time. And I can confirm it ain’t as boring as I always thought it’d be.

I also covered an article on Elon Musk’s businesses, which includes SpaceX – the only private Space exploration business which has managed to beat a lot of space agencies. Be sure to check it out here.

Behold this issue covers what makes a rocket do that – escape the land. With data sourced directly from NASA’s website. Maybe we could create rockets of our own.

So I attempted the EF Standard English Test yesterday and it had one part in the listening section talking about rocket science, coincidental? Maybe.

It’ll be a good idea to share what the scientist shared there.

Both Aeronautical and Aerospace streams deal with non-living flying objects, with the potential to carry humans. The difference is, in brief, aeronautical deals with flights in earth’s atmosphere, while aerospace covers both atmospheric and outer space realms.

Question. Why not deal with only outer space in the Aerospace field?
Good question. But if you think about it, we can’t ignore the fact that to get into space, we have to go through the atmosphere. And none of the principles relating to air pressure and drag (air friction) apply outside of our atmosphere.

The smart guys at the research centers have to take both into account.

As with many other things, the universal rule applies to rockets too: Size doesn’t matter. What’s important is to build them in a particular shape. Your rocket should have a long cylindrical body, a nose cone, and a propellant system to push the rocket. (Don’t get distracted, I’m talking about rockets only)

The body is the main section of the rocket, this holds the main electronics needed to control large rockets, in some cases humans or a car too.

The nose cone helps make air go sideways while the rocket is zooming out of the virus-ridden planet. The propellant system obviously contains the fuel and oxidizers to provide oxygen so the fuel can burn.

What makes it fly?

When a rocket is in flight, four forces act on it: weight, thrust, and two aerodynamic forces: drag and lift.

Weight obviously is units of how much the gravity loves the rocket.
Thrust is the propulsion system’s reply to gravity, it pushes the rocket up (usually).
Drag is air’s reply to gravity. (The air friction)
Lift is what takes you from the ground to the cinema hall, in malls. jk, it’s some sort of aerodynamic force which acts at a 90-degree angle to the direction
Update (Thanks Saurabh - Rocket Scientist, for pointing out): lift is for stabilising the rocket with free stream air hugging it from the sides - i.e. perpendicular to the rocket.

And that’s not all. If you saw the work gravity somewhere, you know Newton’s gonna come and put rules and regulations on the table. Enter Newton’s laws of motion:

1st Law (Law of Inertia): The rocket will stay on the launchpad until a force blasts it off. (Yeah, these lazy bums need fire in the butt too)

3rd law (Every force has equal and opp…): The rocket moves in a direction (up), against the gas. Which in turn is pushes downwards. (They also call the rocket engines “reaction engines” because of that)

Awesome! Off I go to make a rocket now

But… wait, we didn’t discuss how to make it go up instead of in some other direction. Because face it, little instability and you’ll see gravity directing the rocket’s path. And if the science of bad luck is to be believed in, the pointy nose guy will be running towards you in no time. 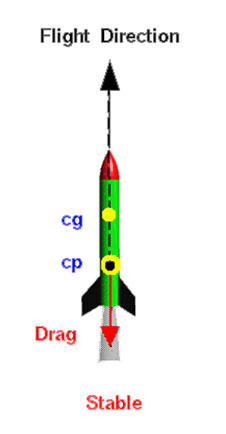 The center of gravity(cg) is the point where the rocket can be perfectly balanced.
The center of pressure(cp) on the other hand only exists when the air is flowing past the rocket in a flight. It’s the location with an average of drag forces.

I’ll save your time and tell you what’s important. To make the rocket stable, the center of pressure has to be behind the center of gravity. This means your best bet is to push cg towards the nose and cp towards the bottom – the wings – the propulsion system.

Protip: Learn from the badminton shuttle. Put weight in the nose to bring the cg towards the top.

That’s it, we have enough information to make a rocket and soon put up a competition for NASA. Muahahaha 😈

Let’s grow the number of aerospace engineers on this planet. And of course, you wanna make your rocket with friends. Go ahead, share this.